Top
Getting ready to hit the Fair!
I am trying my best to keep busy and have a fun time with my son, making the best of everything. Jude has been walking very well lately, sometimes even running!
He has a handful of shoes and sandals, but if it was up to Jude, he would go barefoot everywhere!
I bought him the brightest blue flip flops from Target for $2.

He’s changing more and more everyday. He is trying to sing, dance, and even rebel against mommy. I can see the difference in his face too. Jude is started to look more like his dad. I think its his eyes. Kris has small dark eyes, and since he was younger, they have that sleepy look.

The hoodie that Jude is wearing, is a military Paul Frank sweatshirt from Target that one of my subscribers bought and sent me. Thank you!

Jude likes his sandals in his mouth more than on his feet haha!

I was messing with the zooming in and out, and this one was an accident but I still like it.
(we took a short tram ride from the parking lot to the front gates)

Jude has crazy teeth growing in and I didn’t want to give him too many sweets or candy, so I got him a plain apple on a stick.

Time to have lunch
We knew what was going to happened when we got here…we were going to eat something nasty.

First on the list is a chili dog. Not just any hotdog stand. PINKS, they have a famous stand in Los Angeles where I personally think they are better…and cheaper.

I don’t know what I was thinking with this chicken and bell pepper combo. It was not good at all. It was a waste of $10 so if you are at the fair and see these…walk away!

I got some fried squash with Ranch and hot sauce. This was not the best choice but it held me over. I wasn’t too impressed by what I picked to eat, I wanted to get something fried and failed.

Carly got ‘Yammys‘ which are sweet potato fries. These were sooooo good. I ate off of her plate more than my own.

Even Jude loved the Yammys. He loves french fries, so these were a different by yummy experience for little Dunka.

There were a lot more people at the fair including some of Kris’s family members Lisa and Steve and their two daughters who were delighted to run into us.
There was also a high school band leading a parade of vintage cars and a huge elephant who looked sluggish. I hate seeing animals like this. They look miserable.

I’m sure you all are familiar with Carly, shes one of my closest friends who just started a channel. In one of her videos she received tons of heat about using a damaged dollar bill for nail art.

We ran into about a dozen of these penny rolled machines, which smashes the U.S. penny and turns it into a souvenir and can no longer be used as currency.
No one went to jail after using one of these machines…just saying.

While strolling up and down the fair we ran into an Oxygen Bar. Carly has never tried it and the last time I sat at one was years ago in Las Vegas, NV so we decided to give it a go.
There were tons of benefits they claimed one would get from taken in the oxygen, and a few stood out for me. The most popular feature is the different flavors/scents the oxygen comes in. Carly was stuck on Pina Colada, and I favored Cherry.

Along with this treatment, we got a 10min head and back massage.

We left the booth not feeling any different, except rested from walking.
All in all, I would skip the oxygen and save your money for a funnel cake instead 🙂
__________________________
Say Cheese!
There are plenty of opportunities to stop and take photos, and we took them. I love the little cut out stands that they have throughout the fair, and these are a couple of them.

…RUN!…or give the dinosaur who is chasing you in your fashion backwards outfit a kiss lol.

I think Carly kept me laughing for the longest after seeing her picture.

Of course I’m the fat one! This picture is a little blurry because we asked a family if they could snap a quick photo for us. Carly is holding Jude up haha. 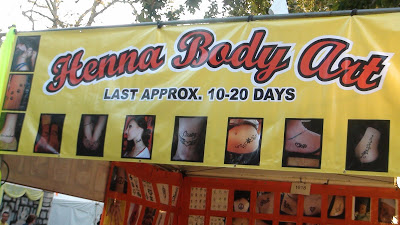 Ive never seen black henna before so I wanted to try it out, and I got a ‘J’ for Jude.
This was a mistake because later that night I went to wash my hands and it almost completely washed off! 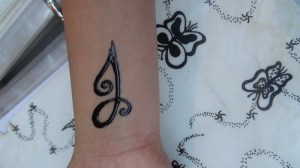 All in all our day at the fair was eventful. I had an awesome time with my son and one of my best friends. I have been getting stronger and happier, and I can see it my sons eyes…he is too. Jude is a free spirit and loves to run free, and he did so after he got a quick diaper change he was off and running! 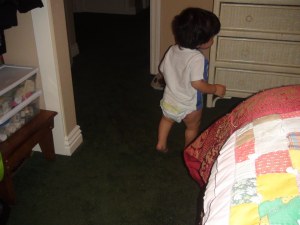 Have you been to the L.A. County Fair this year? What did like/dislike? If I go again what should I make sure to try?
*Latina Kisses*
-Sonia

Want to stay in touch?

Listen to My Podcast